Steps toward completion of the Boundary County Railroad History Courtyard are moving forward in time for the All Class Reunion including an ice cream social and railroad history program at the museum. Today’s photo of a Union Pacific train with the Bonners Ferry Depot and signal in the back are from the Bob Del Grosso collection. Bob was instrumental in securing the UP signal for the museum. 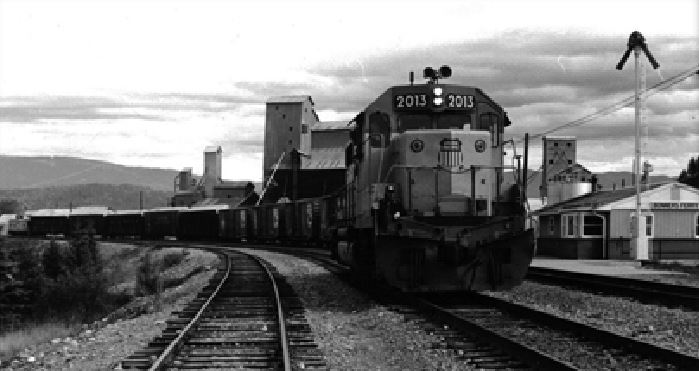 Currently the signal is being restored in the yard at North Idaho Ironworks and will be installed in the Railroad History Courtyard between the museum and the Visitor Center. Funds raised at the ice cream social will be used to powder coat the signal and build a foundation for it.

Four interpretive signs on railroad history are another new addition to the Railroad History Courtyard. The sign project and lighting are funded in part by a grant from the Idaho Humanities Council, a state-based program of the National Endowment for the Humanities. Local researchers on the project are Howard Kent and Sue Kemmis. Mary Reed, former director of the Latah County Museum, provided research and technical editing. Mary Ann Kruger donated the graphics layout and the Bonners Ferry Sign Company provided the printing of the signs.

The brief text on each sign gives a glimpse of the Boundary County history of the Great Northern, the Kootenai Valley, and the Spokane International Railways, as well as travel before the railroads. On August 1, Paul Rechnitzer and Howard Kent will present programs at the museum on the railroads and answer your questions. Recently completed browsing books contain photos, newspaper clippings and railroading stories. The museum is interested in documenting local people’s railroad work and travel experience.

The following text is from the sign for the history of Corbin’s Road, the Spokane International Railway, which still moves through the county under a different name.

“In 1905, Inland Empire construction magnate, DC Corbin, set out to build a railway line from Spokane to the International border. His plan was to import coal from British Columbia to markets in eastern Washington.

The Spokane International Railroad was to connect with the Canadian Pacific making it an International transcontinental line. Financed by the sale of stock, the 140.8 mile line from Spokane to Eastport was completed in October 1906. Construction through Boundary County required four tunnels, bridges, trestles and numerous construction camps. Italian workers named the town of Naples, south of Bonners Ferry. By 1907 the Spokane International ran two passenger trains daily. In 1916, the 30 miles between Bonners Ferry and Eastport included postal stops at Moyie Springs, Eileen, Meadow Creek, Snyder, Sinclair and Addie.

Financial problems frequently plagued the Spokane International. When passenger service was terminated in 1954, the railway initiated a new schedule for fast freight. Finally, in 1958, the Union Pacific purchased the line, constructed a new depot in Eastport in 1962, and built a new bridge across the Kootenai River in 1985.”

Today, Bonners Ferry is still a town along the way. Diesel engines have replaced steam locomotives and the cabooses are gone. The Burlington Northern Santa Fe and the Union Pacific rumble non-stop through the county on century-old roadbeds. The long horn blasts warning people to stay clear of the crossings are reminders of the thousands of workers who built and continue to maintain the lines. This story is dedicated to them.

ALL ABOARD! “The Ice Cream Special” August 1, at the museum. This first event in the Railroad History Park coincides with the All Class Reunion. The event and the new Railroad History interpretive panels are funded in part by the Idaho Humanities Council. Paul Rechnitzer and Howard Kent will share the history of the three railroads in Boundary County. Enjoy fresh dessert made by Peachy’s tractor powered ice cream makers. Admission by donation, choose hobo to first class.

Board of Trustees Monthly Meeting

The regular monthly meeting of the Boundary County Historical Society Board of Trustees is scheduled for the second Tuesday of each month at 5:30 p.m. at the Museum. Note that times, and dates may change.

What are you waiting for? Come on down to the Museum and see what has changed! It is no longer the one room you remember, it is three rooms full of excitement! New things to see every day because once today becomes yesterday it also becomes history.

To help support our Museum
we maintain a small gift shop. 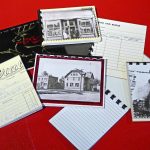 Click HERE to see our White Caribou Gift Shop Page and see some of what we have to offer!